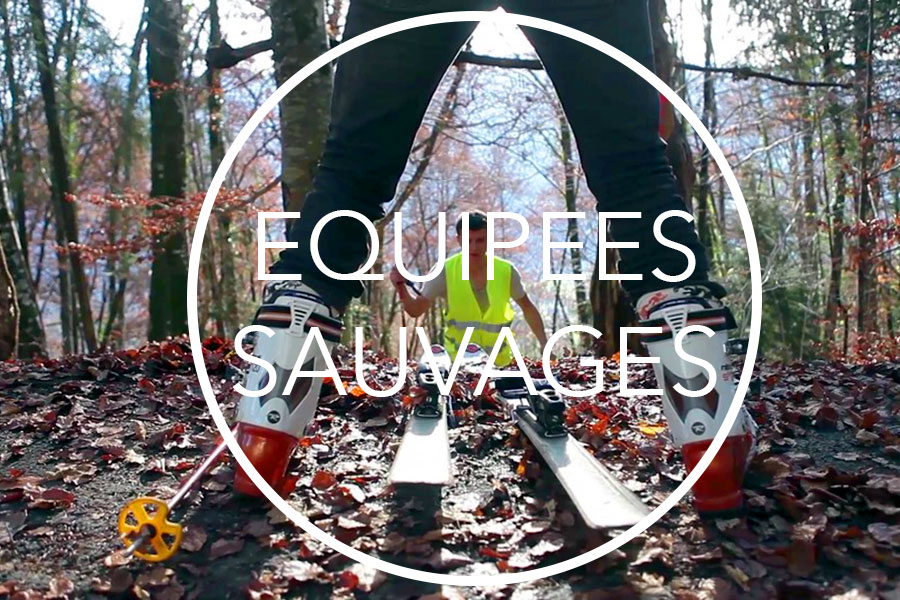 As autumn 2014 turned to winter, the Alps waited with baited breath for the first snowfall.. and waited.. and waited.  The European winter was very slow in starting, much to the dismay of ski resorts in general.

But here, in Samoëns, a solution was found.  While cutting trees for firewood, a (slightly nutty) friend of ZigZag’s had an idea.  Nicolas Minet – famed for being the most photographically talented, photogenic, ski-mad, mushroom-mad, full of life lift operator in the Grand Massif – had an idea.  With no snow on the horizon, why not ski on the autumnal forest floor foliage?  Well, why not?

A few phonecalls later, les Equipées Sauvages was created.  This ‘Wild Team’ consists of a band of friends with nothing to lose (or gain).  Nico’s charisma and talent drew together friends with the talent and guts to follow his direction.  Those familiar with ZigZag’s team will recognise a range of our instructors immediately!  While Nico filmed, others put their bodies on the line.  And so, Leaf Line was born.

The reaction was immediate.  Leaf Line had over 30,000 views on Zapiks within days.

Encouraged by the astounding reaction the first video elicited, Nico and the Equipées Sauvages laughed the unexpected success off and set about filming a second video, just for fun.  With still no snow in Europe, Farm Line was released on December 15th 2014.  The concept was ‘hay skiing’, the thread being that “we don’t need snow to ski!”.

When the snow FINALLY arrived on the 27th of December 2014, it arrived with style – and the Equipées Sauvages were there to celebrate.  A third film about the magic required to break the spell and make snow fall was a hit.  Marvel at the epic beauty of L’Elixir de Peuf here.

Another film followed during the winter of 2015.  L’Avalanche focused on the mystery of the mountains and their dangerous beauty.  A more complex, scripted version of the Equipées’ standard offerings was welcomed with open arms.

This autumn, the Wild Team are back.  This time around, its “canyon skiing”.  Be warned – this isn’t something to try at home!!  Come and join the fun and see the “world premiere” tomorrow night at 9pm in Covey’s Irish Pub.  It’s going to be a good laugh, guaranteed.

« What’s New in the Grand Massif?
Ski Accidents – How to Help »