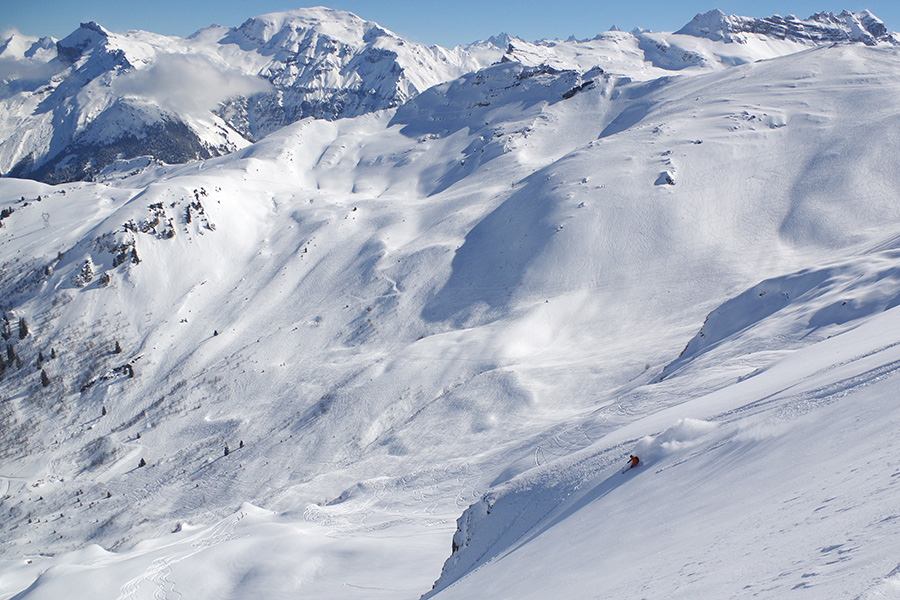 La Combe de Gers is a natural powder-catching basin found in the wild off-piste terrain between Samoens and Flaine, in the Grand Massif.

Affectionately known as “Gers” (pronounced jaire, with a soft G and silent S), this well-kept secret has long been an ski mecca for local off-piste aficionados.  Thanks to the ever-increasing popularity of off-piste skiing, the Gers bowl has become an evermore popular ski area in recent years.

Two seldom-groomed black pistes (Styx and Onyx) take skiers from the top to the bottom of Gers, but the real appeal are the ungroomed powder fields and fresh tracks that can be enjoyed even several days after a good snowfall.  Due to the basin’s northern orientation and altitude, it acts as a natural powder-catching bowl.  Windswept snow often settles in Gers, meaning it has lighter and deeper snow than the rest of the region.

With a range of access points from both the Flaine and Samoens sides, all of Gers’ faces are skiable, although with high cliff faces and steep, avalanche-prone slopes, some faces remain more dangerous than others.  Even experienced skiers who know the area well should be wary of snowfall history and the effects of temperature, wind and sunlight on fallen snow.  All skiers are advised to carry off piste avalanche equipment whenever entering the area.

Gers’ steep natural terrain makes it an ideal environment for deep powder skiing – but also means there can be a high avalanche risk after significant snowfalls.  The bowl experiences major avalanches every season and it is highly dangerous to ski in the area before it is cleared by safety patrollers.  Entering the area alone or without a professional guide is highly unadvised.

If you want to discover fully the off piste areas of the Grand Massif and get the best from them you can join one of our off piste camps that we organize every year in January. The camps include 5 full days of intermediate or advanced level coaching from Monday to Friday. Working in small groups, participants are divided into several groups according to their level and their expectations. The groups are supervised both by our expert instructors to work on the off-piste technique and our High Mountain Guides for the most expert skiers who want to devote more time to skiing and discovering secret places. These off piste camps take place every year over two different weeks in January, starting from Samoens 1600.

Gers is an unmissable element of the Grand Massif for advanced skiers who enjoy skiing off piste, best enjoyed in the company of a professional High Mountain Guide or fully qualified ski instructor.

To book your next off piste experience in the Grand Massif simply contact us at the ZigZag booking office by telephone on +33631204410 or via the button below.

Ski Touring in the Grand Massif

All About Via Ferrata in Samoens
Scroll to top