What’s New in the Grand Massif? 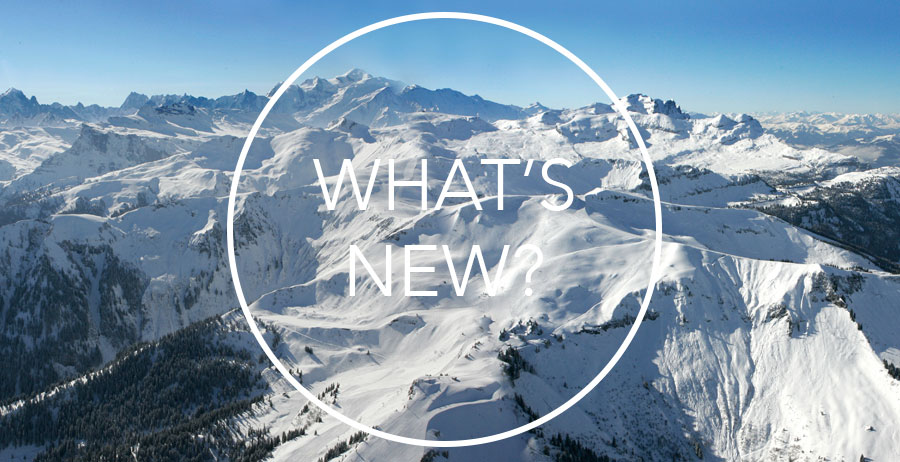 Throughout summer 2015, the Compagnie des Alpes has been hard at work improving the Grand Massif’s terrain and facilities for the benefit of visitors for years to come.  ZigZag participated in a tour of the upgrades today.

So the question is, what’s new this year? 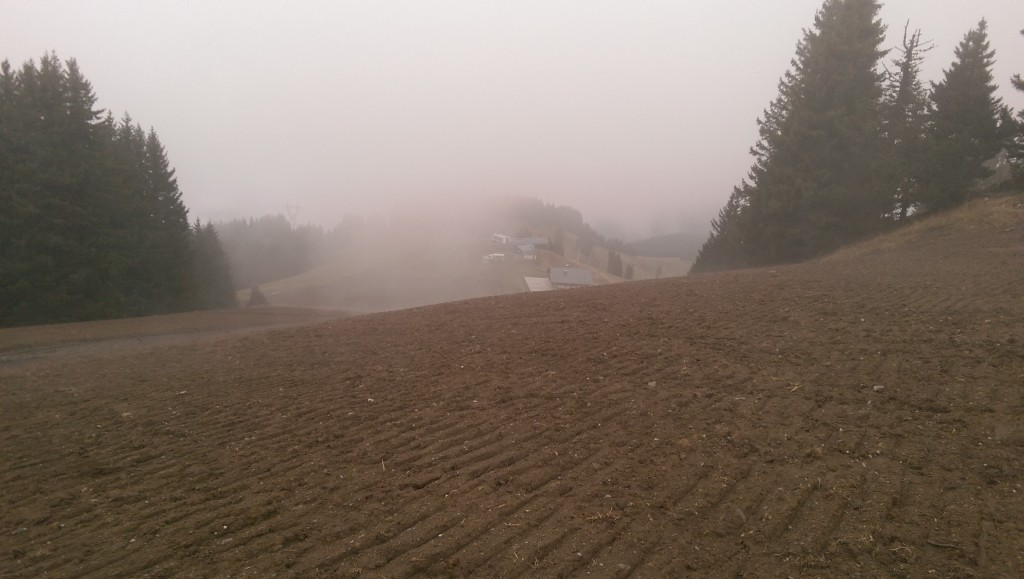 The most striking work we’ve seen is a facelift of the “l’Arête” piste, which has been significantly widened and shaped (see photo above).  L’Arête is the piste that brings skiers from Samoëns/Les Carroz towards Morillon (from top of “Molliets” lift near the big electrical pylon to the top of “Biollaires” lift).  What was a narrow, steep-sided track has been entirely overhauled, with 5 weeks of work required to resculpt the terrain making the piste approximately 3 times its initial width.  It’s now a real slope more than a junction.  The earthworks required to achieve the end result are quite impressive and the Compagnie des Alpes spent a whopping 220 000€ to undertake this improvement. 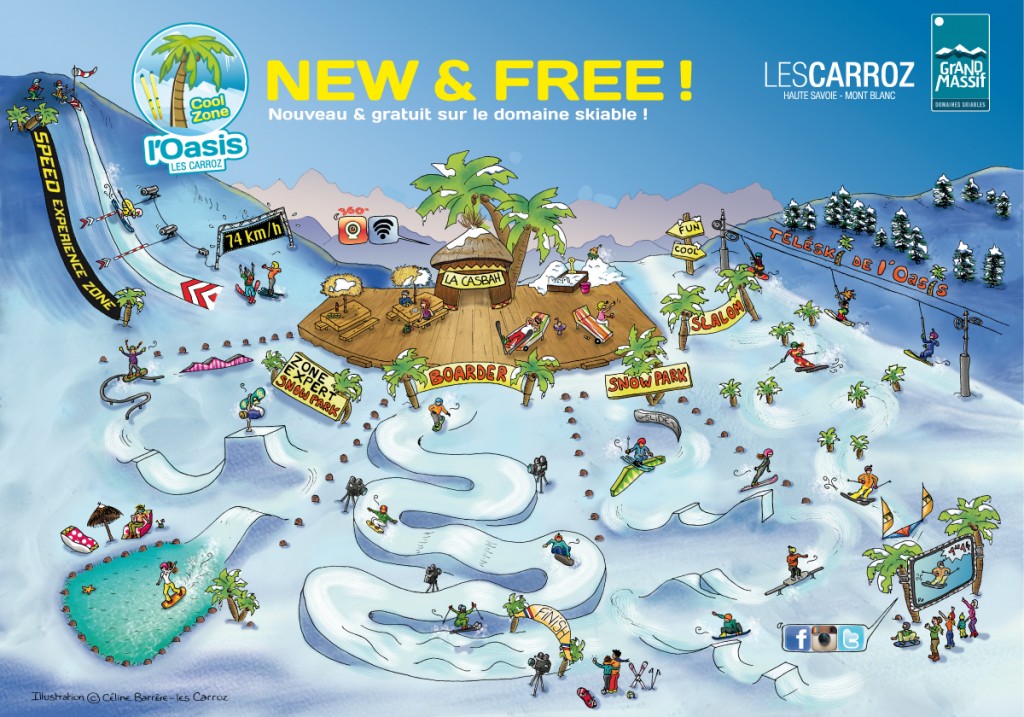 Meanwhile, in Les Carroz, ski – you’re on camera!   In Les Carroz a huge new snow fun zone has been created.  “Cool Zone de l’Oasis”.  The “Oasis” blue piste has been remodelled entirely and now includes a blue level boardercross, a snowpark with more than 30 freestyle modules, a slalom on the edge of the piste, and – best of all – a series of new cameras,  giant screens and a wifi hotspots so you can be filmed and instantly share your best run on social media!  There’s also a red level boardercross in Gron for more advanced riders.

Throughout the whole resort, new systems will be in place on chairlifts to ensure maximum security for children.  One seat will ultimately be reserved for children and equipped with special slide-prevention bars within the Grand Massif within the two years coming.  A sticker will also be placed on each child’s seat, the concept being that if the child can’t see the sticker then they’re sitting too far forward to be safe.  If the sticker is visible between the child’s knees then they’re in a safe sitting position. 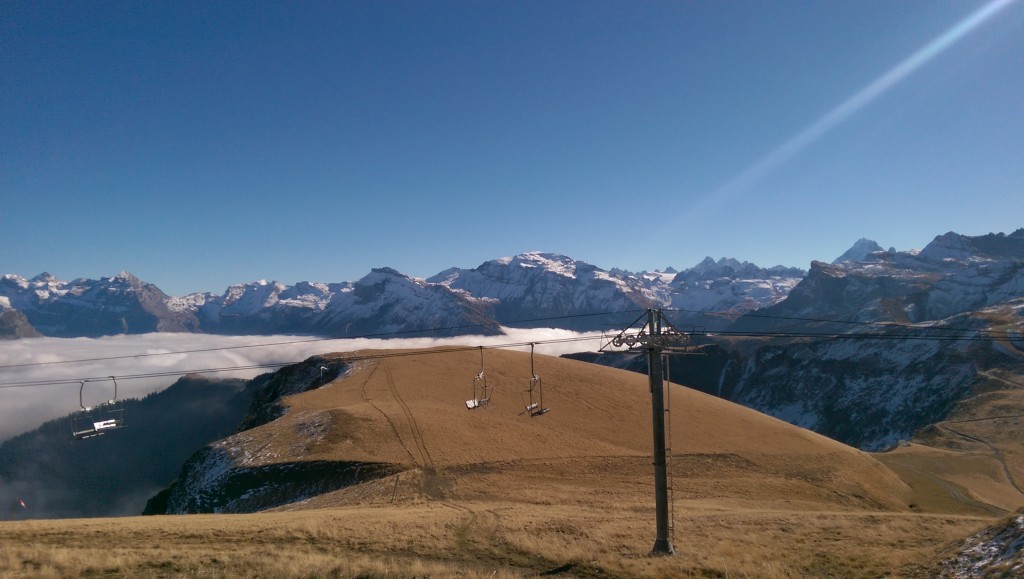 In Samoëns, 300 tonnes of compost and 100kgs of grass seed have been distributed to ensure a high quality vegetative cover of the pistes, which means the snow cover will stick nicely and no nasty rocks will poke through to damage our skis.

In Sixt the Cascade slope is now equipped with a remote controlled snow-making system that will be more efficient and reliable.  Two new snow making canons have also been installed as well as an additional 200m of safety nets.

In Flaine the narrow and winding section of the Tourmaline piste (below the Veret button lift) has been redesigned, widened and leveled at a cost of 300 000€.  This will make the descent to Flaine safer and smoother for skiers of all levels of ability, particularly during busy periods.

The two seat “Pré” chairlift on the lowest beginner zone in Flaine (the Erable piste) has been replaced by two magic carpets.  They offer an easier first-time experience for beginners and will serve to protect the beginner zone from traversing ski traffic.

Flaine’s freestyle zone “The Forest” has been remodeled and is now safer, plus a banked slalom has been added.

The biggest change in Flaine is that the toilets in the arrival station at the top of the DMC gondola on the “Grandes Platières” have been totally renovated to meet ecological guidelines,  now operating on a green sanitation system that adheres to the highest ecological standards.  This toilet facility renovation comes at an impressive cost of 400 000€.

All in all, the Compagnie des Alpes has once again proven dedicated to improving the ski experience in terms of both enjoyment and safety for all those who’ll be on the snow this winter.  Personally, we at ZigZag can’t wait to get up there and try it all out!